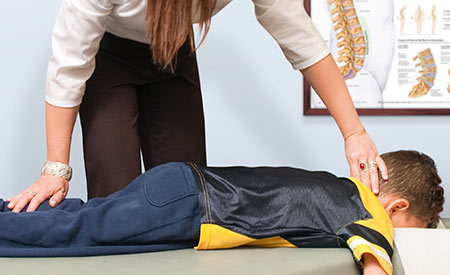 Chiropractic treatment is a safe and effective way to help children manage their overall health and wellness. According to the U.S. Centers for Disease Control (CDC), approximately 3% of children in the U.S. have received chiropractic care. In 2000, there were 30 million pediatric visits with chiropractors in the U.S., and by 2009, this number more than doubled to 68 million. According to the National Board of Chiropractic Examiners, 17% of chiropractic patients in 2010 were under the age of 18, and nearly 8% were under the age of five.

One study found spinal adjustments to help with ear infection symptoms in 93% of children. 75% experienced improvements in ten visits or less, while 43% were feeling better after just one or two visits. An additional study also found that chiropractic care was useful for relieving ear pain from ear infections and other causes.

Many parents prefer to bring their children for chiropractic treatment for ear infections out of concern that there are too few treatment options available from many pediatricians aside from antibiotics or surgery (tympanostomy). Parents and health care practitioners alike have often expressed concern about the over-prescription of antibiotics. And their concerns have merit. The CDC issued a statement confirming that antibiotics are often prescribed when they shouldn’t be (30% of the time) and cautioning that over-prescribing these drugs has resulted in an upsurge of antibiotic-resistant germs.

Recent studies have shown increasing evidence of the role of gut health in immunity and overall health, but antibiotics disrupt the balance of gut flora, with negative health consequences. Given recent discoveries about the importance of gut health, it is essential for parents to know their options outside of prescription antibiotics.

Although babies’ spines are newly developed and flexible, they can be susceptible to injury and stress, so chiropractors emphasize the importance of having your child checked soon after a stressful delivery. The most common reasons young babies visit a chiropractor are for colic and other digestive problems, sleep disturbances and difficulties with nursing. Babies will often have these symptoms as a result of the delivery process. This is supported by publications from a leading Belgian neurologist who claims that passage through the birth canal results in postural irregularities that are best corrected by gentle spinal manipulation.

Babies and toddlers may experience improvements in other conditions as well after chiropractic care, including torticollis (also called “wry neck,” where the neck twists to the side. often resulting in a titled head) and crawling issues. Having your child evaluated by a chiropractor early allows for optimal success in the early years of growth and development.

For both young and older children, chiropractic care can treat or help prevent sports injuries, headaches and growing pains—and research suggests that it may be effective in improving asthma and other respiratory conditions. Older children may seek chiropractic care for musculoskeletal issues similar to those experienced by many young and older adults.

Adjusting the spine supports optimal nervous system function, which has effects throughout the body. Parents have reported that chiropractic care has helped their children with a wide range of conditions that may not automatically come to mind when you think of chiropractic care. These include ADHD (attention-deficit/hyperactivity disorder), bed-wetting, cerebral palsy, eczema, tonsillitis, sinus infections, psoriasis, stuttering and Tourette’s Syndrome. Chiropractic care may even help children with autism. Because the spine represents the centerpiece of the nervous system, regular adjustments can help improve sensory conditions over time.

Why Seek Chiropractic Care for Your Child?

Chiropractic care is noninvasive and has been proven to be safe for children of all ages. Chiropractic treatment offers children a safe and effective method to improve health and manage a variety of symptoms—and to keep the body and nervous system in optimal health while growing.

We look forward to hearing from you.